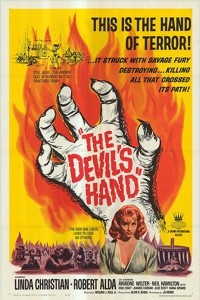 A mystery woman leads an ordinary man down an evil path in The Devil’s Hand.

Rick Turner (Robert Alda) is a man haunted by a recurring dream in which a beautiful woman in a flowing white gown dances for him. The dream is robbing Rick of his sleep and driving a wedge between him and his fiancée Donna (Ariadna Welter), so he’s startled when one day he passes a shop window and sees a doll that looks just like the woman in his dreams. The owner of the shop, Frank Lamont (Neil Hamilton), informs Rick that the doll was custom-made for a client, and Rick arranges to deliver it to her himself. Rick arrives at the luxurious apartment of Bianca (Linda Christian) to discover she is the very image of the woman in his dream, and she appears to know him already. Rick learns that both Bianca and Frank are members of a mysterious satanic cult that uses the dolls as part of their ceremonies. Rick becomes a regular visitor to their meetings and becomes deeply involved with Bianca after Donna is suddenly bedridden. But does Bianca have a plan for Rick that he doesn’t yet suspect?