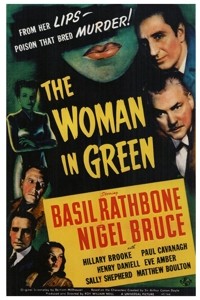 Watch The Woman in Green Online

Based on Conan Doyle’s ‘The Adventure of the Empty House’, The Woman in Green finds Sherlock Holmes (Basil Rathbone) and Dr. Watson (Nigel Bruce) trying to solve the case of the ‘Finger Murders’.

Several beautiful women have been found slain, all with their right forefingers severed from their hands. The police are prepared to write off the killings as the work of a madman, but Holmes deduces that there’s a sane motive behind it all. Sure enough, the trail of evidence leads to Holmes’ nemesis Professor Moriarity (Henry Daniell), who is in league with a female criminal named Lydia (Hillary Brooke).

Like The Woman in Green? Tell us about it...