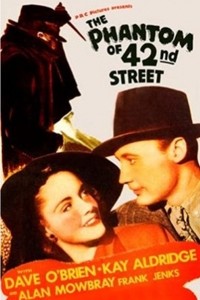 In The Phantom of 42nd Street an actor is killed during the performance of a play while critic Tony Woolrich (Dave O’Brien) is attending. Initially Woolrich is reluctant to investigate, even though he’s encouraged to by his friend Romeo (Frank Jenks), who is also the taxi driver who brought him to the show. Tony becomes more involved in the investigation when there is another murder; and when Claudia Moore (Kay Aldridge), the girl he loves, is suspected, he teams up with Lt. Walsh (Jack Mulhall) to investigate the murders.

Like The Phantom of 42nd Street? Tell us about it...