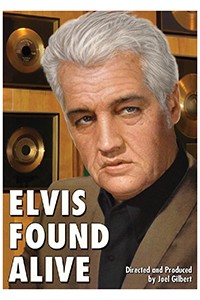 Elvis Found Alive is a spoof documentary that offers the idea that Elvis Presley faked his own death and has since been masquerading as Jon Burrows, an FBI agent. When director Joel Gilbert filed a Freedom of Information Act request seeking documents on Elvis, he was puzzled to find references in the documents to a Federal Agent called Jon Burrows, one of Presley’s stage names. Gilbert tracks Burrows down in California and spins an alternate history of the late musician’s life in which Elvis is alive and well, and a crime fighter.

One Response to “Elvis Found Alive”